Harmony Music School is delighted to have
American Rock Blues legend Joe Bonamassa as its Patron.

2009 was Bonamassa’s twentieth year as a professional musician, an extraordinary timeline for a young artist just into his ’30s. A child prodigy, Bonamassa was finessing Stevie Ray Vaughan licks when he was seven and by the time he was ten, had caught B.B. King’s ear. After first hearing him play, King said, “This kid’s potential is unbelievable. He hasn’t even begun to scratch the surface. He’s one of a kind.” By age 12, Bonamassa was opening shows for the blues icon and went on to tour with venerable acts including Buddy Guy, Foreigner, Robert Cray, Stephen Stills, Joe Cocker and Gregg Allman.

Joe is delighted to be Patron for Harmony Music School
and shares our commitment to providing the highest possible
musical education for all of our students.

Bonamassa circles the globe playing an average of 200 shows a year, and his mind-blowing guitar wizardry and electrifying stage presence are selling out progressively larger venues all the time. On top of touring, recording and overseeing the independent label J&R Adventures with his entrepreneurial partner and manager Roy Weisman, Bonamassa is a spokesperson for the Blues Foundation’s respected Blues In The Schools program, volunteering his time during tours to speak with groups of high school students about the heritage of blues music.

In May ’09, he played to a sold out crowd at London’s Royal Albert Hall, arguably the most prestigious concert venue in the world. During the show, Bonamassa’s hero, Eric Clapton, joined him on stage for a joint-performance of Clapton’s hit “Further On Up The Road.” London’s The Independent said about the show, “The man has arrived, and there’s no turning back.” Shortly after, Bonamassa released a 2-DVD live set – Joe Bonamassa – Live From The Royal Albert Hall – which captures the night in full. Guitar Edge gave it five stars and also said, “It is the wallop of his emotional expression, fueled by the rocking energy he derives from that trans-Atlantic connection and driven by his devastating technical ability, that elevates him about his peers and makes him a certifiable blues guitar hero and the face of his blues generation.” 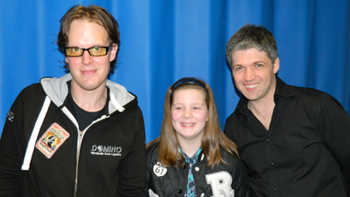