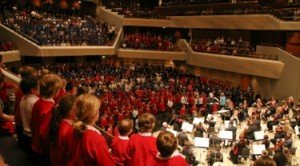 Come and Play with the Hallé

Primary school children from Sheffield will perform alongside the Hallé in a special concert at Sheffield City Hall on Friday 28 June 2013. ‘Come and Play with the Hallé’ is a unique series of concerts specially designed to offer children on the Whole Class Ensemble Teaching programme (previously called the Wider Opportunities Scheme) the opportunity to play and sing with an international symphony orchestra. The concert will be
conducted by the Hallé’s Assistant Conductor, Jamie Phillips, and
presented by Hallé horn player, Tom Redmond.

The concert will present specially composed works which enable collaboration between the world-class musicians of the Hallé and young instrumentalists at the start of their musical journey. Original and arranged material, specially composed by the Hallé’s Education Director, Steve Pickett, for the professional players and young people to share, will be presented alongside orchestral blockbusters, ranging from film scores to famous classics. The children, therefore, experience the power of a symphony orchestra at first hand, as well as being a part of it.

The pieces that the pupils will perform with the Hallé during this unique event are Steve Pickett’s song From a Railway Carriage and specially arranged versions of Strauss’s Vergnügungszug, Polka schnell and Tequila by Chuck Rio.

” Come and Play with the Hallé is an integral and exciting part of Hallé Education’s programme. Having delivered concerts at The Bridgewater Hall in Manchester for a number of years we are thrilled to be able to allow the young people of Sheffield the opportunity to play with a world-class orchestra”.
Steve Pickett, Hallé Education Director